As a PhD student and Post-Doc there has often been someone mentioning going into consultancy. Usually in the guise of 'why should I take THAT job when I could get 30+K doing consultancy' or ' I know a friend of a friend who's earning double what I earn doing consultancy for <insert name of company here>. So it seems to be the generally held consensus that it’s a job you can go into with a PhD and earn a lot of money. Naturally, my interest was piqued. I recently attended a number of presentations on different forms of consultancy and I thought I'd share what I found out.

Fundamentally, consultancy firms give advice to big companies or sometimes the government in order to fix a particular problem. My initial question was 'Why would a pharmaceutical company employ an outsider to help them rebrand after a merger?' or ' Why would HSBC seek the opinion of non-bankers on how to streamline their online banking?’


The perfect situation for these big companies would be if they had a group of people poised and waiting to answer important questions whenever they occurred. But, what would those people do when there are no big mergers to rebrand, no new products to launch? It’s simply not affordable to keep people on the payroll just in case someone in the organisation has a problem. That's when the consultants come in.


They ARE waiting for the next big question to arise. And, when one company is done with them they fill their time by answering the questions from another company, and so on and so forth. In this way consultancies gain expertise in particular areas such as green initiatives, mergers, stock handling etc. and they can use their experiences gained from one company when working for the next. Professional research firms are somewhat similar to traditional consultancies. They are paid to research a particular problem or sector.

So, that’s consultancy. Now, how does it work in practice?
The first thing you should be aware of is that there are broadly two types of consultancy. The first are those firms that advise on matters of principle and what you might call Worthy Causes. These consultants might advise on environmentally sound practices, sustainability or social initiatives. Sometimes these firms are inline with a political party and can be called 'Think Tanks'.  The second type of consultancy gives advice on matters of profit and efficiency. It probably won't shock you to learn that it's the latter guys that tend to make more money and it is this career that people are referring to when they lament their wages compared to what they could be earning in 'consultancy'.

There are hundreds of think tanks and NGOs, dozens of large corporate consultancy forms and a few guys in between and I'm not about to list them all here. What I will do is highlight some of the glaring differences that I noticed from the seminars I attended. I'm going to refer to the two sectors as the 'principles' and the 'profits' camp. I'm not saying this to suggest that the principles camp are never interested in the bottom line (although they are often not-for-profit), nor am I suggesting the latter have no principles. I just need a word to divide and describe these two type of practices.

First things first, all of the seminars I attended were after work, during the week and all who attended were very grateful to the presenters for giving up their time to speak to us. I've often lamented the lack of alternative career advice for those in academia and the current programme at KCL is very welcome. More information can be found on the KCL Graduate School blog, look for posts by the Careers Consultant, Kate Murray.

Ethos and atmosphere.
The seminars followed one another, week after week, so it was very easy to compare them. The very first thing I noticed was the atmosphere and general feel of the room. The difference was quite striking:

-The ‘principles’ consultancy was always presented by women who were confident but laid-back and approachable. The presenters all spoke of their embedded interest in societal change, sustainability or politics (the areas their consultancies/research companies worked in). They had all worked or researched these areas before they got the job and they spoke with great passion about why they felt their work was important.

The ‘profit’ guys, and they were guys, were completely different. Upon arrival, the presenters greeted most attendees in person, they seemed to be on first name terms with most of the room. They did their PhDs at KCL so they probably did know a lot of people there, but they were super-confident, giving away freebies and arriving with leaflets. They weren't imposing or scary but they were completely self-assured and supremely comfortable speaking in this room. You really got the impression that they could chat to strangers all day long. They were very passionate about their company and how well they were looked after.

From what I could gather, the way consultancies get business is largely the same. Sometimes companies approach them, other times they approach the company, but it is always to solve a problem that the company does not have the in-house resources for, be that people, research capabilities or sector knowledge.

What kinds of questions do the companies answer?
This is very different depending on the type of firm and will often have nothing to do with you degree.
‘Principles’
How can we ensure the growing tea industry remains sustainable?
Can we approach the shipping sector as a whole to bring it inline with international guidelines?
Can smaller institutions like the women's institute or the local church help in changing communities’ attitudes to energy consumption?
Can small countries be used as a model for ours?
What is science telling us now about what we need to be looking towards in the future?
Would our society benefit from a shorter working week?

What's the best way for a newly merged bank to carry out it's internet banking?
How can a big pharmaceutical company keep track of its international stock?
What's the best way to demonstrate to a GP that drug 'X' is better than drug 'Y'?
What does the current market for arthritis drugs look like - who's leading the field?

Whilst all companies were keen to point out that skills gained during a degree, such as research, communication and problem solving, were key to success in this field, there was a major difference in the backgrounds of the people that presented. All of the people that worked in ‘principles’ consultancy had prior experience in their field. They had worked in 3rd world development, NGOs and government schemes whilst the ‘profits’ men had next to no business background. In fact, one of them stated that working for a big consultancy firm was like a cheap way to get an MA. You learn a lot about business and you’re paid to do so. 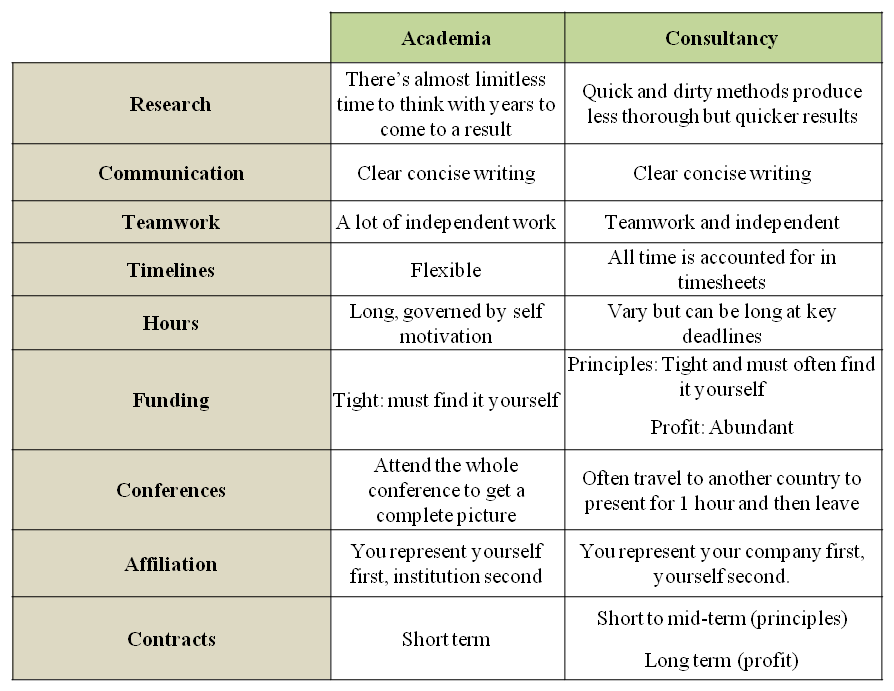 What else do I need on my CV
For 'principles' companies it was apparent that it would be best if you could demonstrate an interest in their sector. I got the impression that of you haven't belonged to a society or relevant organisation before you apply, you are unlikely to be considered in this competitive market. A lot of people simply have done these extra things and you need to demonstrate your passion to get yourself to the top of the list. Think about doing some volunteering or getting involved in societies if you haven't already. The 'profit' companies want drive, ambition and intelligence. If you can get past the tough selection process you're doing well!

What is expected at interview.
Demonstrate motivation, passion and commitment to the specific sector that each company consults on.

For the big 'profits' companies, the interview process is arduous and usually comprised of several different sections and online tests. Check out the website of the bigger companies: they usually describe their interview processes in detail. Expect online tests (which you can practice on-line beforehand), 'stress-days' - where they check how well you can prioritise by bombarding you with emails, face-to-face interviews with partners and high competition.

If I get the job, what will I actually do?
This depends on the company and it's budget but most of time is spent researching, with some time spent talking to clients. The wealthy companies will tend to send you overseas, the small companies will tend to video conference! You will work quite independantly on your part of a project but usually as part of a larger team.

Key points to think about when deciding if this is the career for you
- From the beginning you will probably be expected to be customer facing, as well as doing research, are you ready for this?

- Some companies come up with the ideas but don't hang around to implement them, think about what you want before you apply to a company. For example, are you interested in the research and advice or in seeing a project through to its outcomes?

- The ‘profits’ companies invest a lot of time and money in your training with intensive courses and defined progression and development over the first few years. The ‘principles’ consultancies tend to let you learn on the job and training is much more ad hoc - Think about which is best for you.

If you want to look into consultancy then there are online lists you can look at but there are literally hundreds of firms out there. Use LinkedIn to see if you know someone (who knows someone) who is at a consultancy firm and see if you can get some advice on the inner workings of the company.

The consultancies and research firms that were discussed at KCL and formed the basis of this post were Deloitte, McKinsey, The New Economics Foundation, Social Pharma, Forum for the Future, Centre for Economic and Social Inclusion (CESI). I'm sure you can work out which camp each belongs to...

Updated 24-02-14:You can also get unpaid consultancy experience as a PhD student/graduate by working with Oxbridge Biotech Roundtable. They provide opportunities to get some work on your CV but the assignments are sometimes quite time-consuming and they aren't paid. I replied to a job advert for 10-15 hours a week that, in reality, was as much as 20-30 hours in weeks with big deadlines. Nonetheless, I think it's worth checking out if you can commit the time and want to get some experience.
Posted by Unknown at 05:10