Bloody hell, that was intense!

It’s Tuesday, I’m back in the day-job and people keep saying ‘How was the conference?’ and ‘What did you get out of it?’ The first answer is easy – ‘It was great, there were tappy-tap-tap badges!!’ The second answer is taking a bit more thought.

I could now write a detailed description of all the sessions I went to, explaining the goals and motivations of the panel, the attendees and ending with profound ‘take home’ message from each session. But I won’t. Mainly because a lot of people are already doing this and also because I was told that all bloggers are basically narcissists and only really write from their point of view so I thought I’d add fuel to that flame. Realistically though, this blog is supposed to be my take on finding out about new careers, so I’ll try and keep it personal.

I went out the night before (not a great idea, but it was with a very good friend!) so I missed the StoryCollider (although I intend to catch up via Storify, blogs etc.) so I was a bit tired, but very enthusiastic, when I arrived with no idea what to expect. I received my Blendology badge, which you tap with each new person to share contact information, got a speedy cup of tea and entered the conference… 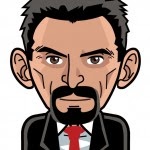 The first session, I can say without fear of exaggeration was ‘brilliant’. Salvatore Mele from CERN discussing how they work at one of the most famous ‘labs’ in the world and how they publish their data. Might sound a bit ‘meh’– but he was an excellent raconteur! He was really enthusiastic about his work, comparing the attention around the recent Nobel prize announcement to a football match and commenting on publishing papers with so many contributors.

His précis of a paper with 3000 authors

'The small greenish bump tells you that the Boson is there-you don't need to read the rest...' Mele on CERN's paper! #solo13
— lauren tedaldi (@LaurenTedaldi) November 8, 2013


His take on an awful lot of data analysing their site usage...

Physicists- 'on average, at 2am, they give up'. Excellent quotes throughout this keynote! #solo13
— lauren tedaldi (@LaurenTedaldi) November 8, 2013 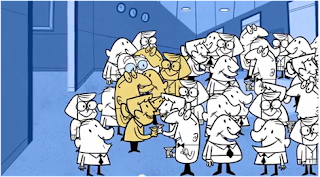 Describing the previously baffling Higgs field with a cartoon video  – still a bit baffling but at least I have a cool link I can send to people now. 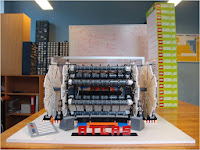 And the fact that you can make a Lego version of their particle accelerator!

If you're still a sceptic, you can watch the presentation here

Then I attended two sessions that have blurred together in my mind – one on open access journals and one about peer review. These are rather hot topics in the field with the general 'ScienceGist' being – when we are fundamentally funded by the public and then published, the material we write should then be physically and mentally accessible by the public. The peer review session was looking at organisations and newer publications such as F1000, Frontiers, Rubriq and Peerage of Science that are attempting to change peer review. This is the standard current process adopted by most journals by which our colleagues must ‘approve’ our work before it’s accessed by the rest of the world. Currently the system is under scrutiny due to a number of critiques ranging from misconduct, retractions, time-delays and ‘it’s simply not the best way to do this in a modern world’. I’m tempted to agree but, as with most things, I think it’ll take time to change the status quo. There is still a lot of prestige (and funding) tied in to publication in the high-end peer-reviewed journals.

After lunch there was talk of a revolution involving such choice life advice such as:


If you want to demonstrate in the streets you do need permission from the police... #solo13
— lauren tedaldi (@LaurenTedaldi) November 8, 2013

Make your point, but make it quickly...Not a bad slogan for life. Thanks @alokjha #solo13
— lauren tedaldi (@LaurenTedaldi) November 8, 2013


MT @lexbwebb: Tips for (life): Wake up and become active. Make an effort. Speak to people and hear what the have to say. #solo13
— lauren tedaldi (@LaurenTedaldi) November 8, 2013

All interspersed with ponderings on just how Alok Jha keeps his hair so voluminous?

The afternoon went by in a blur of saying NO to PDFs and deciding on some do’s and don’ts of Twitter before trundling off to the pub.

Science Showoff showed us that scientists do have a personality, as well as a love of chocolate, guitars, clocks, juggling and of disproving ghosts (or should that say LENS FLARE!).

The  next morning we were thrown in to a session on procrastination, ahem, I mean science games. They were all pretty cool, especially the game that lets you build up neuronal connections by ‘connecting the dots' to a snazzy 80s sci-fi theme tune. I have to wonder though, how many game-players are learning  and how many are just  scientists playing the game as it has less of a guilt-burden than Candy-Crush. I should stress, I honestly never play games on my computer/phone, but, after this session I’ll probably start.

Then… it was time…I had to do my session….Well, there’s the narcissism again, not my session but the session on blogging...

I introduced myself as the newbie I am, got through without getting into hyper-speed speech (too much) and mostly ‘got away with it’. I did get shot down once or twice but that actually helped things move along. We discussed what we blog on and why, who to and if we care what they think.

The floor discussions were really useful for me to understand lots of emerging opinions in the area, as well as those I disagree with, such as ‘blog comments are dead’ (Thanks Roland Krause!). Personally, I would really appreciate someone leaving comments on this blog - this whole thing is a learning exercise so I’d love to know what people think about what I’ve said and how I’ve said it – I’ve been warned that the number of comments is usually inversely proportional to how useful they are though so keep it clean, people.

Here’s the video - Yes, I have watched it back (narcissists, remember?)


After our session there was a really interesting panel discussion about staying in research and doing scientific communication at the same time. I think I’ll add it to a full post when I ‘officially’ cover scientific communication careers but needless-to-say, it seems that you can ‘have your cake and eat it’ (although there was no cake) but you can’t (and perhaps shouldn’t) expect your institution to understand/be supportive, especially at the start.

The final session I attended covered the idea behind the XKCD comic Up Goer Five project. In this, a rocket scientist described his rocket or (Up Goer) using the ‘top ten hundred words people use most often’. As ‘thousand’ wasn’t in it, you can see how they start to immediately rewrite their description using simpler words – ‘door’ instead of hatch,  ‘people-box’ instead of capsule or cockpit and (my personal favourite) for the helium store – 'things holding that kind of air that makes your voice funny.' It sounds a bit pointless until you realise it’s a good way to stop using unnecessary words as ‘standard’. I confess, I’m really guilty  of this – I’ve already used the word raconteur today, but it’s a good exercise to go to their website and try it out. Try describing your job without the words ‘associate, manager, web, retail, engineer or project’ or spaghetti Bolognese without ‘cow’, ‘beef’ or ‘meat’

On the 'What did you get out of it' stream-of-consciousness, well, that's going to take some time but one thing that I found really interesting was the big idea of the conference: Impact. For those who don’t work in science and don’t have to write grants (lucky you, when you read 'grant' think ‘written begging for money’) nowadays scientists have to outline the ‘impact’ of their research. I write it like that because the impact of my research is often very limited at the start, but doesn’t mean it doesn’t matter.

For example, your average Joe isn’t ‘impacted’ by Bragg’s law, they couldn’t care less about X-ray diffraction, they don’t know who Rosalind Franklin, Francis Crick or James Watson are, but they probably know what DNA is, and their lives and education will have been shaped by the early fundamental science that lead to Bragg’s law. How does your average physicist assert the impact of an equation that could, someday, have enormous uses and ramifications?

Answer: They could use scientific communication.

They could make people ‘ooh’ and ‘aah’ at the seemingly magical function of a gyroscope. They could make chocolate mayonnaise to describe surfactants. They could enter schools and discuss the interesting facets of a career in science. They could blog about their research to the public. They could tweet from the lab or a conference. They could do all manner of things to show the funding bodies that they have IMPACT. They could go the extra mile to show that their research isn’t just a bunch of self-serving superiority-complexed people swanning around the corridors of their local institution. If we want, expect and need the government (i.e. taxpayers) to fund us then we need to be part of their lives as much as the local community centre, the playground, the museums and the art centres or, when it comes to chopping funding, who do you think will come first?
Posted by Unknown at 06:44