As you may be aware from some of my earlier posts, I'm really interested in different ways of scientific communication - From museum events to blogging and twitter. After speaking to lots of different people I thought the only way I could see if I was even capable of writing on a regular basis was to try some writing, so I started this blog.

I've only been doing it a few months and ended up on a panel about blogging (much to the chagrin/confusion of true blog aficionados) so whilst I'm not exactly a 'big deal' (Ron Burgundy quote #1 of this blog, I hope not the last) I am trying to learn as much as possible. In order to see just how far I can push this idea in a short period of time I thought I'd turn my hand to a few other things to see just how I can best communicate my science, the science of others and the science of well, science. After discussing this amongst my colleagues, the general consensus was 'Hey, can we have that list too?' So, here it is:

1. Keep writing the blog...
Sometimes this is easier said than done, although I do enjoy it - I'd recommend starting one if it's something you think you might enjoy, you can write about anything you like - people read all sorts of rubbish when they're avoiding their tax returns, their kids and their actual jobs!

2. Practice communicating science to a 'lay' audience.
Urgh, is there a more patronising word than 'lay'? Anyway, you know what I mean, talking about science to those who aren't scientists or don't work in that area of science. This could encompass journalism, blogging, teaching, museum work, comedy and all sorts, as I've recently learnt. 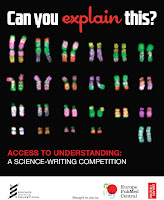 Competitions
I'm going to enter a couple of science writing competitions, one on 'translating' hard-core papers into 800 words of accessible text, and another more vague competition (also 800 words) that requires the writer to discuss the topic of Openness in Science - I'm not even sure I like the word 'opennes' but I'll give it a try.

Plain English Summaries
I want to add a few entries to Science Gist, a site where you can add simplified summaries of any papers you may have read. An additional bonus behind this is that a lot of people make summaries already in their own note-taking, so why not share it and see if what you write makes sense? 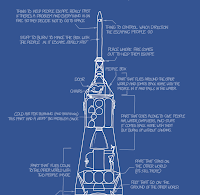 Not-so-plain English Summaries
If you want to take plain English summaries a step further you can give UpGoer Five a try - this is a project where you describe anything you like (your job, your pet, Schrodinger's uncertainty principle) using just the top one thousand (or ten hundred to be 'in the rules') words. It's an extreme look at the use of jargon but it is surprisingly difficult and suprisingly entertaining to try and describe spaghetti bolognese without 'meat', 'beef' or 'cow'. It gets it name from the original project where a rocket scientist described his rocket (or UpGoer) using these rules in a popular comic (xkcd).

3. Get Political.
Ok, not exactly, but I want to enter the poster competition that will be exhibited in the House of Commons. I think this will be a little different to the standard poster sessions scientists get involved in as it will involve communicating your work to a non-expert audience, not something you get chance to do often, is it? Or maybe you go to the House of Commons all the time. I doubt it, But maybe...

4. Get marks for attendance
I'd like to get more of an idea of how science is communicated to the general public that's not via the written word so I've been taking advantage of living in central London and going to as many science events/seminars as I can fit in. Apart from Science ShowOff (science-based comedy, performance and juggling), I attended Science Uncovered at the Natural History Museum (and blogged about it here), Science Museum Lates at the Science Museum, attended a seminar on Science Gallery (and it's planned expansion to London) and also watched a heat for FameLab. I'm thinking of sending in a video entry. I may very well bottle it.

At the Science Museum Lates, I bumped into a friend of a friend of a... you get the idea,  and we got to talking about the speed dating event that was happening at the museum. He commented 'Well, at least you know that the person you are going to meet will be of above-average intelligence.' I thought that was a bit sad (and not necessarily true) - I hope the (free) museums and their events in London are for everyone and not just those that deem themselves 'better than the rest'. To be honest, given the location of many of the museums in London, the only possible stereotype you could throw about is that the attendess might be richer than most. Or more likely to be called 'Cosmo' or 'Jacinta'. Both good names, by the way, but you get what I mean, I hope. (Funnily enough, I am planning to write a post on the people that actually go to the museums, but that's not for here and now).

5. Media Fellowships.
This is something I think I may have 'missed the boat' with, but I'd have loved to have heard about them during my PhD. There are lots of different media training opportunities available (listed on the BSA site here - British Science Association, not Bovine Serum Albumen, anyway...) but I've heard really good things from people who went on the Media Fellowship available from the BSA. you need to be still IN research, and contracted until the end of Dec 2014 to even apply for the 2014 places, something that's not an option for me, but I'd definitely give it a try if I could. It involves 3-6 weeks away from your research so your boss has to consent AND submit a letter of recommendation (i.e. you can't do it if they don't agree, it seems). For more information on working with/in/for the media, check out this page, again from the BSA.


5. Applying, applying
Basically I've upgraded from not getting well-paid positions that I'm not sure I want, to not getting lower-paid internships that I definitely want. I'd say to anyone else considering a similar move to mine (i.e. out of something where you've proven your experience, into something new) you're probably going to have to take a pay cut. This may seem like a pain to begin with, especially if, also like me, you're thinking of trying to buy your first house. In London. However, you are giving yourself a chance to try something new, internships are rarely very long and, if you can prove yourself, companies will usually keep people who've shown they are pro-active and keen enough to do an internship in the first place - so chin up, it's a bit of a cliche but I'd rather be doing something I actually liked!

I've recently found a new jobs board on the British Science Association (BSA), as well as a lot of pointers from Twitter and the PSCI-COM JISCMail. Actually, the BSA (again) has information on everything from  public engagement to graphic design on their Science in Society section - worth checking out.

In other news
This week I applied for 3 jobs, 2 internships and turned down a well-paid, great opportunity job that I won't actually like doing (more on that later).